To Answer Your Questions.

Since announcing our engagement, the volume of questions has been near overwhelming. “How did you ask? Where did you do it? How long have you guys been together? When’s the date?” and one of my personal favorites, “You’ve been dating someone?”

For you Chico folks who have been there pretty much every step of the way, this will be old news so don’t feel obligated to read. For everyone else, I’m going to attempt to be thorough, despite brevity and being concise being my forte.

Rachel and I met at Dutch Bros. in early March. I was working the night shift and she drove up thinking she was going to get a nice warm Chai, not a husband. However, God is awesome and without getting too far ahead of myself, He decided to provide both. I spend a lot of my time at work talking to customers, however not often do I spend an hour talking to someone who had never been by before. We spent the last hour that Dutch Bros. was open talking about everything from work to our mutual love of Volkswagens to the differences between an Elk and a Moose. Seriously.

Now I had never asked a stranger out before but after 45 minutes, I hardly felt like we were strangers. I gathered some courage and asked her, “You have tomorrow off and I don’t work until 6. What’s for lunch tomorrow?”

Her response was to start rummaging around her car and pick up a box of gummy bears and raise an eyebrow with a frown. My thought was, “Wow. This girl would rather eat gummy bears for lunch than let me take her out. Ouch.” But I salvaged what confidence I had left and continued the conversation. After telling me she had to go every 5 minutes for about 25, she starts rummaging around her car again. “What are you looking for?”, I asked with eager anticipation.

“Something to write my number on.”, was her response.

Well the next day, I guess the gummy bears weren’t looking so good. I got a text message saying that she was hungry and wondering if we were still on for lunch. Unfortunately, I had just finished lunch with Augie but was I going to say no to a girl who had captivated me using only her words and her smile for an hour? No. So I faked hunger and we met up for lunch. Probably the only time I’ve ever gotten a salad at Chipotle. I guess I didn’t fake hunger so well after all. Long story short, since the day I met her, unless one of us has to leave town, we’ve been together every day.

How did I propose? Well she had never been to San Francisco before. I love cruisin around the city, I love the bay, and shoot, I love the food. I’d been trying to take her on a day trip there ever since I found out she’d never been. Well last Thursday ended up being the day.

She thought I had to work all day. Little did she know I’d been trying for days to get that day off and finally had the day before. So Thursday morning I ring her doorbell and leave a note telling her that we’d been together 6 months and that it was time to celebrate (Which was true, but hardly the reason). I told her to dress warm and to bring a nice change of clothes. So I pick her up 45 minutes later and we hit the road. The entire drive I was changing our destination. First I told her we were going to a casino in Oroville and that’s why I had taken the day off. Then once we passed Oroville I told her I changed my mind and we were going to start our day with breakfast at the Black Bear Diner in Gridley. From there our destination changed to Yuba City, then Woodland, then Davis, then Vacaville, then Vallejo, and finally we ended up in San Francisco.

We had lunch on the wharf, she barked at the sea lions at Pier 39, and we meandered in and out of a lot of the shops. We had talked about how neither of us can go to the mall without feeling like we’re at work and how nice it would be to be able to go to a mall just to walk around and look at stuff. So we went to the mall by Union Square and some of the big stores there. We learned things about each other. Like when we’re watching football together, we need to remember that I made it through 15 minutes in Sephora and that sometimes we do things that just one of us enjoy because we love each other. In Urban Outfitters, we learned that I should never wear V-Necks, but it was worth the laughs.

So after that it was time to get to our dinner reservation about 20 minutes outside of San Francisco. Let me tell you, changing into nice clothes in a Shell Station bathroom makes for a funny memory. Especially when one of you has curl her hair and shave her legs. Seriously, funny stuff. Thankfully we made our dinner reservation on time. Good thing too. I made the reservation for half an hour before sunset. I’m workin on getting some pictures up but no luck yet. Dinner was overlooking the Pacific right at sunset. After dinner we took a walk on the beach and then right there with waves crashing a few feet behind us, I asked her to marry me. Oh yeah, and she said yes. 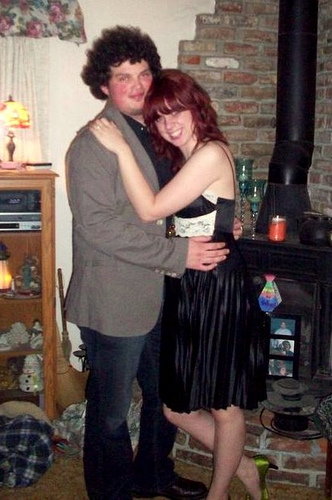 Before every noteworthy event of our lives, myself and the other grandchildren take pictures in front of my grandparents’ fireplace. My aunt deemed it only fitting that we had our picture taken there that night as well. If we look a little haggard, it’s because it’s 2am after a really long day.

So there you are. That’s the short version of our story. Any questions?

My Day at the Bay.

Rachel had never been to San Francisco so we made a day of it.

Got some more food.

END_OF_DOCUMENT_TOKEN_TO_BE_REPLACED

Letters to the Editor, Vol. 2

Andrew Osenga did it again. A free album. You can get it here. I haven’t listened to it in its entirety yet but after listening to it the way I usually do a brand new album I think I’m going to like it better than Vol. 1, and I loved Vol. 1.

You’re curious how I listen to a new album now, aren’t you? Ok, so more often than not, I don’t have time to sit and listen to an album straight through and if I do, a lot of times I’m too excited and lack the patience to listen to it straight through and hear all of the songs that way. So this is what I do. For each song on the album I listen to the first 10 seconds then skip to the middle and listen to another 10 seconds, sometimes I’ll even listen to the last 10 seconds. As a musician, I’m actually a little embarrassed of this method, knowing that if the artists ever had a  way of knowing that I was doing that they might want their album back. However, in my experience, it’s proved a quick way to get a general idea of how good an album is going to be…generally. I will say though, I won’t write off an album until I have listened to it straight through, the way it was meant to be listened to. So don’t judge.

How do you listen to a brand new album?

It’s been funny to realize over the last few weeks that there are only 3 or 4 adults at our church on any given Sunday morning that don’t have a blog. I guess we’re a church full of geeks that way. Anyway, today Aaron set up a blog on our website. Go check it out!

Are they listening to the same thing I am?

I know. More videos, less words. Bear with me. Although I was feeling a lot better yesterday, I’m feeling almost back to start today: not well.

So my question is, are John MacArthur and R.C. Sproul listening to the same stuff I am? This stuff is awesome.

Disclaimer:  I was speaking in sarcasm. Please, I beg you, don’t listen to these songs in their entirety. Although, be sure to check out the sweet dance number at the end of the second one. It’s worth watching but I don’t know if it’s worth watching the whole video for. Just skip to 1:50 on the counter. You’ll see.

And within 4 clicks we were here:

I’m issuing a challenge. How far off track can you get in 5 clicks? You should comment with your beginning and ending video. Go.

Down and Out Again.

God in His awesome providence saw it fit for me to teach last night. However, He did not see it fit for me to go to Santa Cruz. Yesterday afternoon I was noticing that I had some weird irritation on my face. I thought it was weird but, whatev right? Well this morning I woke up and it had taken over my face (along with a killer headache) and had crawled down my shoulders and onto my arms. I knew I had to go to Woodland either way, either to meet up at Woodland Christian and go to Santa Cruz and tough it out, potentially contaminating everyone, or so that I can go to the doctor’s office in Davis. Yeah, I chose the doctor. Sorry Dub C. Turns out it’s either a reaction to the antibiotics I was taking for my wisdom teeth or some kind of virus. The doc favors the antibiotic theory, I favor the latter. I’ve had the antibiotic before with no problems and this time I finished it a week before this reaction started. Hopefully he’s a better diagnostic than I am.

Anyway, enough about breakouts. Last night the second half of my message was largely inspired by a message CJ Mahaney gave at Resolved this year. I wish I could link to it directly but their web site is set up differently and it’s not possible. You should listen to it anyway. The audio is free and he did a much better job than I did. Go to the Media Vault. Click on Resolved. Then Resolved 2008. Then Audio Downloads. Then go to the second page and download Session 11: The Cry From the Cross. Awesome.

Update: So it’s probably been 8 hours and about 5 of them were spent either in bed or on the couch. I think it’s safe to say this is a virus. He said he didn’t think it was a virus because “[I] would feel like crap.” Well, now I do. Rachel saved the day though. Read about it.

You know…stuff…
Blog at WordPress.com.